Class 1/2 on the track of planes

“Flying” was the theme of the upcoming project days within the framework of Erasmus. During the regular team meetings, we thought together about how we could work on this topic with the students as the students of class 1/2 need an action-oriented approach. In addition, many children in the class show great interest in airplanes and flying objects. Therefore the idea was born to visit the nearby airport Münster Osnabrück. In preparation and in order to stimulate pre-concepts among the students, we watched a child-friendly film about the airport which explained the first steps that happen on an airport. The students followed the film with great interest. Finally, on 10 July, we took them to the airport. The children were thrilled by the child-friendly tour as many of them saw an aircraft at close range for the first time. In the course of the school year, we were already able to witness how the students enjoyed building various paper planes on their own and how they observed and tried to optimize their flight characteristics. On the project day, the students got to know a new flying object made of straws and paper. In order to encourage the children to learn independently, the students were given detailed construction instructions, which they could use to rebuild the “airplane” with mutual support. Afterwards, the students were able to test the new flying object with regard to its flight characteristics and try out various throwing techniques. 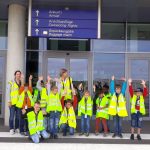 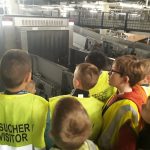 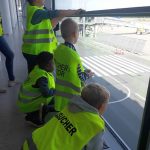 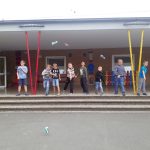