Many students associate the beginning of their holiday with flying and airplanes.
But many people, such as businessmen or football players use the airplane for their job.
In addition, aircrafts are playing a major role in the worldwide transport of goods and products.
In the future, the aviation business is expected to continue to grow even more,
although this has a serious impact on the environment.
Considering the above, we decided to focus on the aviation business and aircrafts during the project days.

These topics are aligned with the interests of the students.
Since class 2/3 has previously focused on the unit biodiversity and environmental protection, a connection could be made between the two subjects.
Since the topic “aircraft” is very broad, the team of class 2/3 agreed to primarily focus on experiments that show why airplanes are flying.
The students should be instructed by their teachers to run experiments, observe, document and design their own flying objects.

Furthermore, it was obvious to the whole team that the nearby airport Münster/Osnabrück (FMO) should be integrated into the project days as an extracurricular place of learning.
The goal of the project days was, for the students to get to know the functioning of aircrafts and to recognize the consequences of further aviation-development for the environment.
The aim was that the students should finally be able to name characteristics of flying objects and validate them with the observations from the experiments.

The topic was introduced with an educational film about the history of flying, technical inventions and the consequences of the further development for every-day life and the environment as well as certain models of operation of airplanes.
The construction of a flying object took place after the presentation of the film.
Further, a corresponding book box from the city library aided with the start into the project days.
The books were accessible for the students throughout the project days.
Also there was an experiment on the first day for all students under the topic “Why does an airplane fly?” Every student took a piece of paper, held it in front of their mouth and blew it away.
Something unexpected happened: The paper was not pushed down, it rose into the air.
With this experiment the students will be getting closer to the subject.
A highlight for the pupils was the trip to the airport. Here they got the opportunity to experience first-hand the knowledge they gathered from the educational film.  The highlight of the project days was the airport tour which took over two hours. 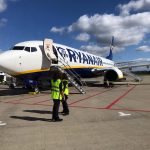 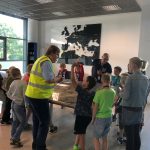 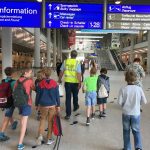