In geography the topic “continents” was still missing… quickly the connection was found.

On a project day we dedicated ourselves to the continent “Australia and Oceania”. The fairy tale of the Aborigines “The Invisible Companion” served as an introduction. After the pupils had grasped the geographical basics, they dealt in groups with the landscape, the animals, the sea and the reef.

The main part of the day was the boomerang. This hunting weapon, although not originally from Australia, is still often associated with this continent. The pupils sanded, worked on and painted a wooden blank in the style of the Aborigines.

Afterwards we dealt with the special flight characteristics of the boomerang and of course made many flight attempts outside and learned a lot about flying.

We had a great day. 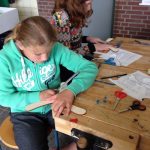 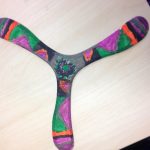 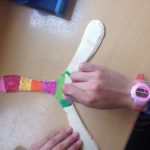 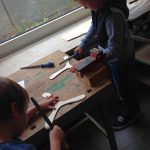